In a testimony in the Sentinel a few months ago a woman who had been imprisoned during World War II described an experience reminiscent of Biblical accounts. She had been imprisoned for being a Christian Scientist. She was one of many who were tyrannized at the time by the Nazi regime.

She said that after she was arrested she and a fellow Christian Scientist decided at one point to hold a church service in their cell. In the course of this service they sang a hymn. Apparently it enraged the guard, who stormed into the cell and screamed at them. The woman wrote, "When he had left, my colleague's response was 'Now trouble is really going to come down on us!' Filled with conviction, I was able to reply to her, 'Nothing bad is going to come down on us; God is over us!' The following morning our door was opened and we were set free." Sentinel, September 25, 1989, pp. 44–45 . 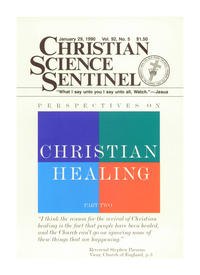