While I was visiting a branch church one Wednesday evening...

While I was visiting a branch church one Wednesday evening recently, the readings from the Bible included the parable of the prodigal son. Up until that evening I had thought I was the only one who had struggled with that story. But the testimonies that night showed otherwise.

I remember as a child feeling a sense of injustice for the boy who faithfully remained home with his father. I was convinced that the younger son returned home only because he had run out of food, funds, and lodging, and had no place to go. This feeling stayed with me through the years. Many of my friends tried to reason with me, and two friends in particular pointed out every article they came across in the Christian Science periodicals referring to the prodigal son. 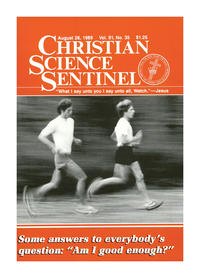