If we find ourselves being pushed around, we probably need more humility, not less!

Egocentric faults such as pride of opinion, the rigid "I want" and "I don't want" of self-will, the craving to impress others, all conspire to shove humility right out of the picture—and along with it the serenity it generates. But even if we believe these weaknesses to be such a part of us that we can't help ourselves and we're reluctant to discard them, not one of them is true of man, who is made in the image of God.

Humility is not just another high-grade human trait; Christian Science shows us that it's a natural, inseparable element of our spiritual identity. It's a gift from God that can never be lost. We don't acquire it; we uncover and express it. And when we uncover even a smidgen of it in ourselves, where it already dwells, we begin to see the peace and poise it can bring us.

Send a comment to the editors
NEXT IN THIS ISSUE
Article
Where is thy faith? 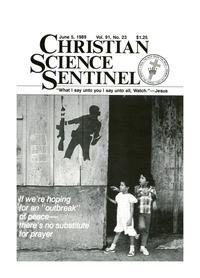