At a Protestant seminary in the southern United States a few years ago, the senior students were asked to design an unusual class project. See "Praying with the Klan," The Christian Century, May 10, 1989 . The purpose of the project was to define a significant issue that had stirred controversy in the community and then explore a way to address that issue constructively. The students chose to attempt a dialogue with the Ku Klux Klan.

Their plan was to invite someone from the seminary and the local university, as well as a journalist and a representative from the Klan, to come together in a forum for public discussion. And from the very beginning, the students' hope was to have genuine communication and a search for understanding, not a debate.

Send a comment to the editors
NEXT IN THIS ISSUE
Testimony of Healing
When my son was about three years old he became ill with... 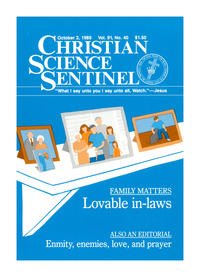