Once when Peter was out riding his bicycle, he followed some older boys without telling his mother where he was going. They led him across the street and several blocks away from his home.

But Peter knew he was not allowed to cross the street, and Mother scolded him when she found him. She had driven around in her car looking for him.

Send a comment to the editors
NEXT IN THIS ISSUE
Testimony of Healing
Shortly after my wife and I were married, I began to operate... 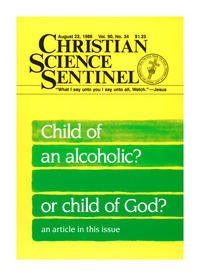