Children are an example to us when it comes to making friends. They seem to cut through all the barriers that would separate and divide. For example, a little boy called Frankie was brought to a Christian Science Sunday School when he was just three years old. He came from a tough neighborhood, and his elder brother had taught him how to defend himself on the playgrounds near his home.

Frankie got on pretty well during the class session that first Sunday, but when it was time to get his coat and go home, there was some excitement and his little fist came out and he clipped another small boy round the ear. Happily no real damage was done, and the mother of the other child quickly comforted her son. She reminded him that Frankie was new and really needed a friend.

Send a comment to the editors
NEXT IN THIS ISSUE
Testimony of Healing
I am very grateful for what I have learned, and am continuing to... 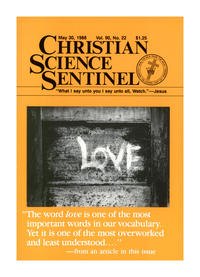