Christian healing: neither mythology nor magic

Many people consider Jesus' healings as either mythological additions to the Bible story or else as magical displays of supernatural power. Christian Science offers another view.

For many years now, there have been efforts in theological studies to take what may be considered the mythology or "magic" out of the Bible. This "demythologizing" of Jesus and the Bible often leads to doubt about the authenticity of Biblical miracles because they do not seem to fit within the normal parameters of human reason or within the familiar confines of accepted physical science. Such efforts might be viewed as an attempt to reconcile the morality and spirituality of religion with the (supposed) authority and knowledge of physical science.

Mrs. Eddy recognized the necessity for the reconciliation of religious faith and the understanding of God's relation to man with the honesty, exactness, and truth-seeking found in the practice of scientific law. She wrote in Science and Health: "It has been said, and truly, that Christianity must be Science, and Science must be Christianity, else one or the other is false and useless; but neither is unimportant or untrue, and they are alike in demonstration. This proves the one to be identical with the other." Science and Health, p. 135. 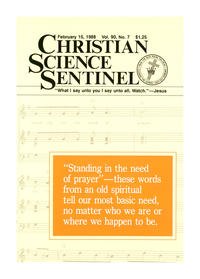