My parents became interested in Christian Science when I was...

My parents became interested in Christian Science when I was eight years old, and I have relied on no other means of healing since that time.

As a child I remember saying that I would never go up in an airplane. But many years later my parents were living in Bermuda, and I wanted to spend my vacation with them. Going by ship would take four days out of my vacation, so I decided to "grit my teeth" and fly. The flight was very calm, but because of my fear I was very ill by the time I arrived at my destination. I saw that gritting my teeth was not the Christianly scientific way to solve the problem. 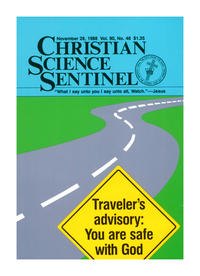