I am so grateful for the help and encouragement I have received...

I am so grateful for the help and encouragement I have received from others' testimonies in the Christian Science periodicals over many years. My last testimony was published in the Sentinel in 1979, and I would like to share some further experiences of Christian Science healing.

One experience, which took place many years ago—a few days after the American-British landing on the beaches in Normandy in 1944—never fails to give me joy, wonder, and encouragement whenever I recall it. I was the lorry driver for a group of men. When we got an order to move, I ran across a cornfield to get the lorry. I had taken the rotor out of the engine so that no one could move the lorry; but now when I put my hand into the pocket where I kept the rotor, it wasn't there! What could I do? I didn't think there was a replacement anywhere, and to look for it in the cornfield seemed hopeless! 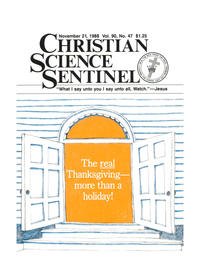