What has to change?

When there are differences or misunderstandings in a relationship, it is easy to think that the answer is to change everything but our own viewpoint. But doesn't spiritual healing have to begin within us?

Frequently one may be tempted to think, "If only 'they' would change, everything would be OK." When personal differences arise, it often seems that others are at fault. We might even be convinced that if they would only change their position, everything would be all right. But is that really a trustworthy solution?

I found some humbling answers to this question early in my marriage when differences between my wife and me became evident. Before too long a pattern developed in which we each would in a sense go our separate ways within the marriage. This continued for a period of years.

Send a comment to the editors
NEXT IN THIS ISSUE
Article
Some years ago Harvard psychologist Robert Rosenthal... 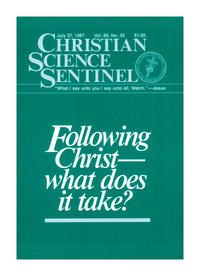