A short time ago I had a dream. The thought of it has remained. There was hatred, conflict, and tyranny in a city. These were overcome as a handful of people continued to pray and refused to consent to the terror.

Are dreams of such victories the stuff of fantasy? It's an important question. In her writings Mrs. Eddy generally uses the word dream in a distinct and incisive way. She depicts mortal existence as a dream of material pleasure and pain in matter. From this mesmeric dream mortals must progressively awake in order to overcome the evil and hurt that populate human experience. She contrasts the "dream" of evil with the reality of God and His spiritual idea, man. 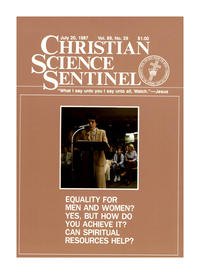