Only through a basic change of thought—from matter to Spirit—can one find the answer to this question.

Instant revitalization from using a particular brand of soap when one showers after a hard day at the office or on the tennis courts! That was the kind of message relayed in a recent television commercial and in many others like it. Such claims seem laughable and harmless until one considers that they stem from the basic false belief that man is physical and governed by so-called physical laws; that man's health and strength are directly dependent on matter, including personal habits of diet, exercise, physical refreshment, and rest.

How greatly this sense of man differs from what the Bible tells us. In John we read: "God is a Spirit" and "All things were made by him; and without him was not any thing made that was made." John 4:24; 1:3. And we read in II Samuel, "God is my strength and power." II Sam. 22:33. 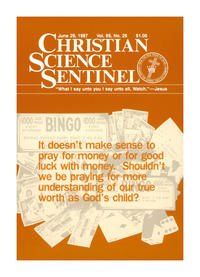