Christian Science first touched my life at a time of great need. I had just had a surgical operation, and little hope had been offered for my recovery. I was a young boy at the time. An aunt who was a Christian Scientist came to visit me. She stood at my bedside for a few moments of what I later learned was silent prayer. From that moment on I began to recover. This aunt loaned my mother (her sister) a copy of Science and Health by Mrs. Eddy, and she frequently mailed us copies of Christian Science periodicals. 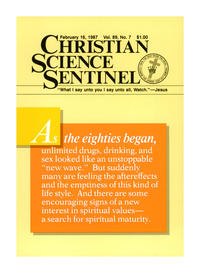