Our spirituality to the rescue

Is spirituality some intangible religious goal? Or is it a practical and effective answer to human hardships?

A Man I know was without a job. He'd resigned from his former position, but the resignation had been forced. This came early in what he'd hoped would be a promising career in a large industry, and the temptation to feel inadequate, guilty, and frustrated was strong. Yet, as a student of Christian Science, this man knew he must resist that temptation.

He reached out to God, Spirit, in prayer and soon could see that instead of wrestling with a sense of personal failure he had to walk away mentally from a mortal, material sense of life. 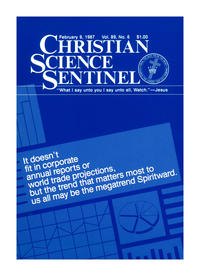