I will never forget what the testimonies of healing in the Christian Science...

I will never forget what the testimonies of healing in the Christian Science periodicals meant to me many years ago when I was first introduced to this Science. I had been living in New York City for about a year because of my work. My home was in Los Angeles, and I didn't know many people in New York.

For quite some time I had been struggling with a great sense of anxiety. I was also physically ill. Under this stress, as a means of seeking relief, I had come to rely heavily on alcohol and drugs (the drugs of that day called "uppers" and "downers"). Instead of receiving relief I was getting steadily worse.

Send a comment to the editors
NEXT IN THIS ISSUE
Testimony of Healing
I would like to express my gratitude for healings that took place... 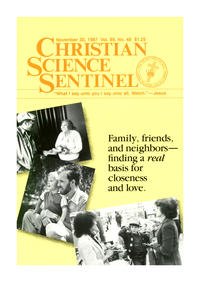