To be a second miler

A friend had asked me to do an extreme favor. Outwardly I was gracious enough, but inwardly I was growling and knew I had to pray. I thought about going the second mile as Christ Jesus advised in his Sermon on the Mount.

In those days of Roman rule, a non-Roman was required by law to carry a Roman soldier's gear for one mile upon request. Jesus said to go with him voluntarily a second mile. 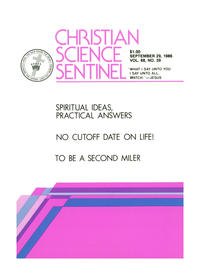