For many years the testimonies in the Christian Science Sentinel...

For many years the testimonies in the Christian Science Sentinel and The Christian Science Journal have been an inspiration to me. I have been grateful to those healed through prayer who are willing to share their experiences. Many times an account of a specific healing has been concluded by the testifier's gratefully acknowledging the healing of other health challenges, such as burns, sprains, or so-called childhood diseases.

Especially after I became a mother, the references to healings of so-called childhood diseases seemed to awaken in me a desire to know how these healings had come about. 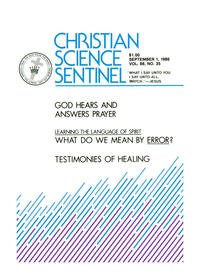