As a general rule I'm not attracted to magic acts, but there was something very appealing about the young man on the television screen. He expressed such joy and a real love for his audience. The talk-show host commented that he was not only an outstanding human being but among today's finest magicians. But the young entertainer corrected him, saying he preferred to be called an illusionist. As far as he was concerned, there is no such thing as magic. He "sets up" an illusion, then leads the audience into seeing what it wants and expects to see.

My thought went back to a discussion I had taken part in as a teen-ager in the Christian Science Sunday School. The subject of the Bible Lesson The Bible Lessons are published in the Christian Science Quarterly. that week was "Matter." And we were talking about the definition of matter that Mrs. Eddy gives in the Glossary of Science and Health (see p. 591). When we came to the word illusion in the definition, the discussion really got lively: "If this table is illusion, how come my elbows aren't sinking right through it?" "If matter isn't real, how come I'm sitting in this chair without crashing to the floor?" 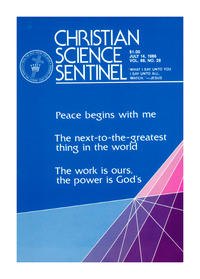