Have you ever played "Simon says"? It's a game in which players are allowed to follow a command only if it begins with the words Simon says. The leader can say anything he wants, but if a player doesn't listen carefully and follows a command that doesn't start with Simon says, he gets taken out of the game. The last person left in the game is the winner.

Send a comment to the editors
NEXT IN THIS ISSUE
Testimony of Healing
Soon after I was enrolled in the Christian Science... 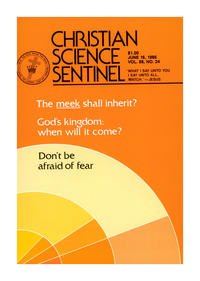