with contributions from The Editors, Susie Smeyers

In the January 20 issue of the Sentinel we published a "Profile" called "Forgiveness in Beirut. " It told of the experience of Margaret Powell, a Christian Scientist, as she confronted the severe injuries of her cousin Mary Lee after the bombing of the American Embassy in Beirut. She said that her relationship to her cousin was very close—they were more like sisters. In the attack Mary Lee's husband had been killed.

Mrs. Powell flew to Beirut to help her cousin. In the "Profile" she told of her struggles with fear and of how she found it possible to forgive in the light of God's love. 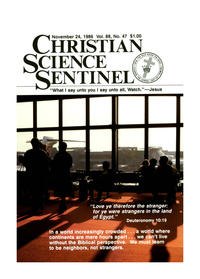