As a violin student I became accustomed to hearing my teacher's version of Thomas Edison's comment about genius. "Genius is ninety-nine per cent perspiration and one per cent inspiration." Quoted in Matthew Josephson, Edison (New York: McGraw-Hill, 1959), p. 435 . My teacher would say, "Practice is I percent inspiration, 99 percent perspiration." These words were calculated to get me to work when I had been sitting around waiting for the inspiration to hit and consequently getting nothing done. But for all the good this saying can do, it also has its limitations.

After a while, one feels the demand is for 100 percent perspiration, with inspiration a lost jewel. The buoyant joie de vivre seems lost. For instance, sometimes an orchestral musician, who plays the same music year in and year out, may begin to feel as if life is an endless bombardment of Brahms's Fourth or Beethoven's Fifth.

Send a comment to the editors
NEXT IN THIS ISSUE
Article
Drug aftereffects: freedom through reformation 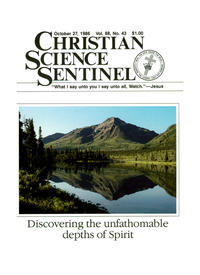