My mother passed on shortly after my birth, and as I had no...

My mother passed on shortly after my birth, and as I had no opportunity to know her, I experienced no sense of loss in my early years. However, as time passed, there were innumerable occasions when I thought about her and wondered what kind of relationship we would have had, particularly when I saw the close, warm relationships my friends had with their mothers. My father seldom spoke of her. (I realized later that he was still grieving and that this had kept him silent.)

I longed to know someone who had known my mother well and who would share their friendship with me. But this did not happen. The longing to know about her increased as time passed, and I began to feel a deep sense of loss.

Send a comment to the editors
NEXT IN THIS ISSUE
Testimony of Healing
Christian Science was brought to my family's attention by a... 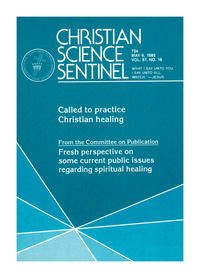