A Czechoslovakian film cartoon was shown one evening at a large international conference. It had been preceded by days of mostly tedious speeches and parliamentary maneuvering. But the droll animated cartoon did more than anything else to bring the meetings alive.

It was called "To Fly." Very simply, it showed, in black and white, a massive gray hive or hill in which people monotonously carried out repetitive, regimented tasks.

Send a comment to the editors
NEXT IN THIS ISSUE
Editorial
Who was Jesus? 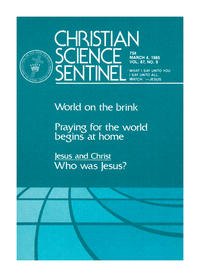