Eliminating imperialism ... in our own backyards?

Just before the turn of the twentieth century, in an address to Christian Scientists, Mary Baker Eddy warned of the serious danger of imperialism. See The First Church of Christ, Scientist, and Miscellany 129:3–5 . Of course she was speaking of it on a national scale. Yet in thinking about the whole issue in its relation to our own times, I have wondered if there might not also be another aspect to be considered—one that could strike a little closer to home than the way the broader sense of imperialism is usually perceived.

Observers have noted, for example, that in contemporary society people appear to have become in many respects increasingly self-centered. Looking out exclusively for one's own personal interests seems to be a commonly accepted modus operandi of daily life. And many people fall into a shortsighted pattern of thinking. They assume it is necessary for self-preservation to use every opportunity available to take advantage of others—on the job, in commerce, in dealing with people day-to-day, even in subtle ways in one's own family life. Might not this tendency be considered a kind of personal "imperialism"? 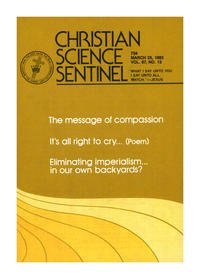