The "meat" of kings or the word of God?

The Babylonian King Nebuchadnezzar devised a plan several thousand years ago for utilizing the new talent in his realm. After Jerusalem had fallen to his army, Nebuchadnezzar selected a number of the most promising young Israelites to whom might be taught the Chaldean knowledge and language. The king further determined that during this period of three years the young men should be given the finest nourishment for their bodies, and so he appointed for them "a daily provision of the king's meat."

The account of this incident is found in the Old Testament of the Bible, and we learn that among the exiles brought together by the king were Daniel, Shadrach, Meshach, and Abednego. Because of their religious convictions, these four refused the special food provided by the court. The narrative tells us, "Daniel purposed in his heart that he would not defile himself." 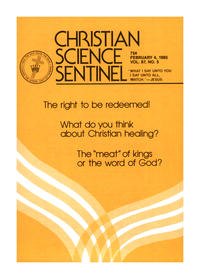