For over forty years Christian Science has been my inspiration...

For over forty years Christian Science has been my inspiration and guide as well as a sure defense against a variety of dangers in times of war and peace.

During the Second World War, I served on a naval ship. Near dawn one day, all the ship's crew were at action stations. On the quarter-deck I was responsible for telephone communication with the bridge. The radar corvette [an unmanned small ship] in the flotilla was zigzagging at high speed, with depth charges loaded in the stern. Suddenly I saw the corvette bearing down hard on the left side of the ship. It appeared that a collision was imminent. At that point I affirmed: "All is under the control of the one Mind, even God" (Science and Health by Mrs. Eddy, p. 544). I had time to pray along these lines with renewed conviction.

Send a comment to the editors
NEXT IN THIS ISSUE
Testimony of Healing
When I was in elementary school, I began wearing glasses 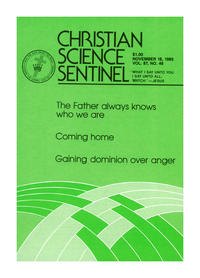