The spirituality of mankind

In the early years of this century, a concerted attempt was made in the United States to suppress Christian Science and render its practice illegal. Society consciously rejected the attempt on grounds that it interfered with religious rights under the Constitution of the United States.

Thinking people—including legislators, newspaper editors, state governors—recognized the threat of class legislation. They also saw that the campaign represented a form of persecution and intolerance at odds with the very spirit of a country which has its roots deep in the principle of religious liberty. 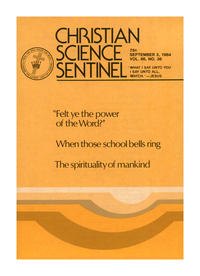