When I was in my early teens I was unsociable, an intellectual...

When I was in my early teens I was unsociable, an intellectual snob subject to extreme moods. I considered much of the Bible, particularly accounts of the works of Christ Jesus, to be unbelievable nonsense, and I labeled myself an atheist. I also read avidly about mental phenomena, such as telepathy and hypnotism. However, when Christian Science came into my life, all that stopped.

When my mother began to study this Science, she sent some issues of the Christian Science periodicals to me while I was away at boarding school. The following summer I assembled a three-foot pile of issues of The Christian Science Journal and the Christian Science Sentinel next to my bed. By the end of the summer I had read every testimony of healing in the entire pile. And I knew that I had found the only religion in the world that could fully explain the healings of disease related in the New Testament. Not only that, I could see that Christian Science enables us to experience such healing. 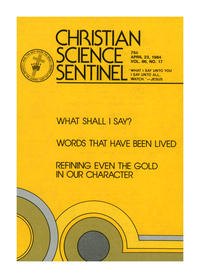