I'm prompted to share what Christian Science has caused me...

I'm prompted to share what Christian Science has caused me to understand, and how I learned of it. This goes back many years, to a time after the Second World War. I had received a rather shaky education, but I wanted to succeed fully and rapidly. So I emigrated abroad and, after many setbacks (the details of which I will spare you), I succeeded in establishing myself in business, bought a house, and owned a great deal, materially speaking. In fact, I was what some might call a "brilliant success."

I did not know of Christian Science at that time. But I did believe in God. 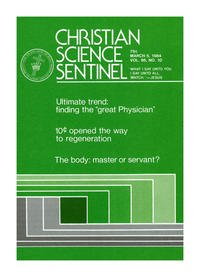