The news magazine reported a suicide that ended a man's bout with a serious illness, and called the act a "commitment to human dignity."  Newsweek, March 14, 1983, p. 77. During recent years there has been a growing public campaign in support of the position that any person has the inherent right to end his own life.

But consider which is the higher dignity for humanity: the bleak philosophy of voluntary euthanasia or the Bible's overriding message of hope and salvation? Throughout the Scriptures there are accounts of men and women confronting the most grievous of circumstances and yet remaining steadfast to God. They went forward with faith in divine Truth and found victory, redemption, healing. 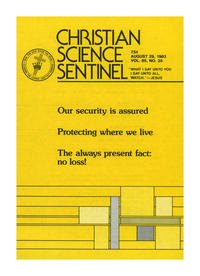