I have so many reasons to be grateful to God

I have so many reasons to be grateful to God. I was led into Christian Science about twelve years ago, and the solace and confidence I have today, during these economically uncertain and threatening times, came as a result of a healing I had early on in my study of this Science. It was a healing of a most insidious fear of poverty.

Frankly, I did not know at the time that I had this intense fear. I just knew that I felt insecure and had a dread of being out of work and in debt. But the fear of poverty went beyond these obvious and common human concerns. I was harboring a morbid belief that I would not only lose all worldly possessions but would be rendered incapable of ever reobtaining them, and consequently would live in abject poverty the rest of my days. And that was the state of mind I found myself in after I had had a personal business failure and was unable to get another job.

Send a comment to the editors
NEXT IN THIS ISSUE
Testimony of Healing
I am well beyond ninety, and for the past sixty years Christian Science... 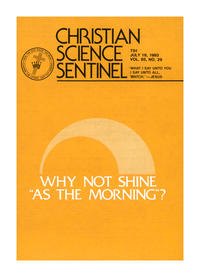