About a year ago, I noticed that our sixteen-year-old...

About a year ago, I noticed that our sixteen-year-old daughter seemed to be losing quite a bit of weight. When I asked her about it, she replied that she was just trying to slim down a little for the summer. I reminded her that God's child is always in perfect proportion.

During the next few months, however, she continued to lose weight. I prayed earnestly to see her in her true being—as the perfect reflection of God. But when I tried to talk with her about the weight loss, I discovered she was not always honest with me concerning what she was eating. Family and friends became alarmed at her appearance and urged me to get her to eat, which of course I had already tried to do, but to no avail. It seemed she had become a stranger, both in appearance and in attitude. Yet through all of this our daughter seemed to see no change whatever in her physical appearance, and became obsessed with the notion that she must lose still more weight. On a human level, we just could not seem to reach her. 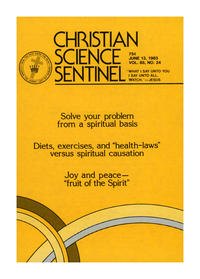