A number of years ago a group of doctors at an asthma clinic...

A number of years ago a group of doctors at an asthma clinic here in Australia informed me that it would be to no avail to continue treating my son. Everything that could possibly be done medically—including all manner of medication and treatment, as well as change of climate—had been tried and had failed. They told me, "We feel it is kinder to tell you that it will be impossible for you to raise your son."

Until I began nursing work in a hospital, I had always felt I had a good friend in God. Later, when I saw the children in one of the wards suffer and was told that this was God's will, I felt that this God was not sufficiently intelligent for me to believe in anymore. I then set up my own standards to try to live by, and these proved a useful premise for me, until I heard the terrible report from the doctors concerning my own little son.

Send a comment to the editors
NEXT IN THIS ISSUE
Testimony of Healing
For Christmas my brother gave me a very special Swiss Army... 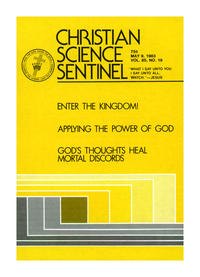