Every member of our family has been enlightened, educated,...

Every member of our family has been enlightened, educated, and healed by Christian Science.

When my husband was born he had a clubfoot. His parents had only begun to study Christian Science. His grandfather urged them to have surgery performed to correct the foot, but the young couple chose to rely on God as they were learning to understand Him in Christian Science. A Christian Science practitioner was asked to pray for the baby. My husband was healed and learned to walk normally. He became an active Boy Scout and athlete. In high school he was a state champion swimmer, and eventually he served three and one-half years of active duty in the Navy during World War II. 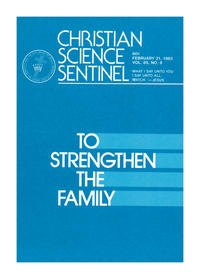