One day I promised my three-and-one-half-year-old son that we...

One day I promised my three-and-one-half-year-old son that we would go to the neighborhood park. When the time came I told him to get ready. He said, "I can't walk there." I replied, "Oh, we're not walking, we're driving." And my son said, "Mom, I can't even walk to the car." He then went over to the sofa, lay down, and proceeded to get very sick.

I sat down beside him and asked him to repeat with me "the scientific statement of being" [Science and Health by Mrs. Eddy, p. 468]. He said that he couldn't do it. After sitting beside him and praying for about fifteen to twenty minutes, I realized that the child was not getting any better. In fact, he appeared to be much worse. So I went straight to the phone and called a Christian Science practitioner for prayerful help. Then I returned to the sofa to sit with my son.

Send a comment to the editors
NEXT IN THIS ISSUE
Testimony of Healing
"Pilgrim on earth, thy home is heaven; stranger, thou art the... 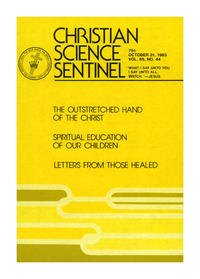