The nineteenth chapter of Acts gives us an interesting account about the sons of Sceva. Apparently they had been impressed by the healing work of St. Paul and the Christians and decided to try their hand at copying it. Their results weren't quite on a par with those of Paul. The Bible tells us: "And the evil spirit answered and said, Jesus I know, and Paul I know; but who are ye? And the man in whom the evil spirit was leaped on them, and overcame them, ... so that they fled out of that house naked and wounded." Acts 19:15, 16.

There's a good chance that Sceva's sons said exactly what they had heard Paul or other Christians say while healing. But judging from the results, those words weren't enough. They were repeating inspired words of others, but they had no fidelity of their own to heal like Christ Jesus or Paul. You might even say their words weren't honest because they didn't well up from within the men's own spiritual conviction and Christianity. The One-Volume Bible Commentary, edited by J. R. Dummelow, says: "The exorcism of these vagabond Jews was simply the uttering of magical formulæ. They thought that the mere words 'in the name of Jesus' would produce the required effect." The One-Volume Bible Commentary (New York: The Macmillan Co., 1936), p. 845 . 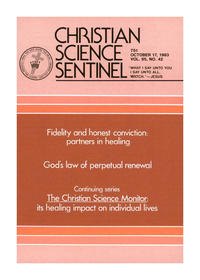