While with my family at a pizza parlor/video game center, I soon found myself glued to one of the games. There I was, clutching the joy stick and completely entranced with gobbling those little dots—running from ghosts, then turning to devour them. I was unaware that I had been playing over an hour, nor did I hear the announcement that our time in the game room had expired. Only when an employee politely but firmly asked me to leave did I realize how engrossed I had become in the game. I had been oblivious of everything else!

A short time later this incident helped me to see how important our focus of thought is. One morning I woke up feeling ill. As I was lying in bed, the events of the evening just described recurred to me, and I began to notice some similarities between the video game experience and my present one. Just as the ghosts on the game board had seemed so threatening, now I was fearful of being overcome by ghosts of pain and discomfort. Just as I had been hypnotized by the game's music and excitement and oblivious of people and objects in the room, unaware of the true-life situation around me, now I was mesmerized by loud-talking bodily symptoms and unmindful of ever-present spiritual reality. 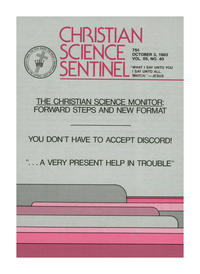