In The Christian Science Journal of May 1978 a statement was issued under the above heading. It accomplished much good at the time, and we believe that with some updating, it can serve a useful purpose now. As our Leader, Mary Baker Eddy, writes: "The weeds of mortal mind are not always destroyed by the first uprooting; they reappear, like devastating witch-grass, to choke the coming clover. O stupid gardener! watch their reappearing, and tear them away from their native soil, until no seedling be left to propagate—and rot." Miscellaneous Writings, p. 343.

We frequently hear it said today that society is sick, that the churches are failing, and that Christianity is dying. This claim is often promoted by those who would like to see Christianity actually die and be succeeded by their own particular cures for society's ills. A similar desire appears to motivate some who predict the imminent demise of Christian Science and the Church that represents it to the world.

Send a comment to the editors
NEXT IN THIS ISSUE
Editorial
Too easily offended? 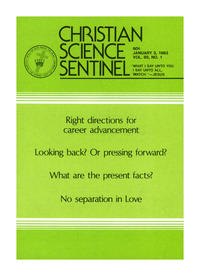