It is generally believed that material things are substantial and real and that ideas are rather vague and insubstantial. I once explained to an inquiring friend that in Christian Science man is understood to be the compound, spiritual idea of God, good. His response was that he would like to think of himself as being "more than an idea or thought floating around somewhere out there in space." 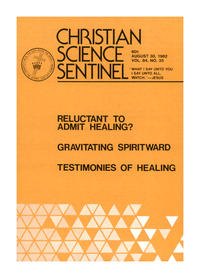