As a young child I was taken by my grandmother to...

As a young child I was taken by my grandmother to a Wednesday testimony meeting at a branch Church of Christ, Scientist. Years later when I was in high school, my mother became very ill. A physician examined her and diagnosed tuberculosis in an advanced stage. She was then placed in a sanitarium some distance from home and told that she had about six months to live, even with good care.

After two months in the sanitarium, my mother requested that I come get her as she wanted to die at home. During the trip home we had to make a change of trains. As we waited at a railroad station for our transfers, I was grieved at the sight of my mother lying stretched out on a bench. I mentally reached out for some kind of help and then remembered that Christian Science testimony meeting I had attended years before, where people had told of being healed through Christian Science. I suggested to Mother that we try Christian Science—it couldn't hurt and it might help. She was too weak to talk but indicated to me that anything that I wanted to do was all right with her. 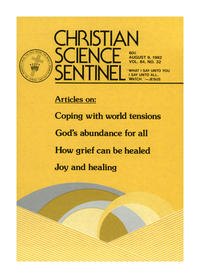