Prayer is not a process of asking God for what we want—then hoping we will get it. Prayer in Christian Science is the affirmation of God's allness and the recognition of the fact that man is the expression of God, created by God, and in possession of all he needs right now. The phrase "hope and pray" may lead some to associate prayer with guesswork and chance. But there is no guesswork, no chance, to prayer. We pray by knowing the allness of God and the ever-availability of good to His idea, man.

Several years ago a story was related to me about a midwestern community that had been plagued with a severe drought. Since the area was dependent on farming, the situation was causing severe economic problems. The community decided to turn to God for help: a prayer meeting was planned. All denominations were invited to gather in the center of town; from there they were to march to a park on the edge of town, where the meeting would be held. As the marchers reached the park, one mother noticed her young daughter was missing; as she started back along the dusty road, she saw the little girl in the distance and realized the youngster had gone back to get one thing the rest of the crowd praying for rain had forgotten—an umbrella!

Send a comment to the editors
NEXT IN THIS ISSUE
Article
Walk with, not away from, God 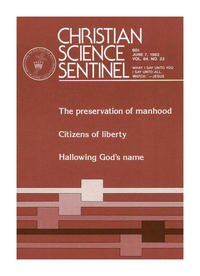