The Church Manual: government by law

Because of the spiritual sensitivity and commitment of one woman, Mary Baker Eddy, the teachings of Christian Science remain available today for the healing and regeneration of mankind. Receptivity and consecrated prayer brought the revelation that enabled her to discern not only the spiritual depth and practical application of Christ Jesus' teachings, but also the procedure by which their purity could be preserved.

Several events during the early years of the movement convinced Mrs. Eddy of the need for safeguarding the revelation from attempts to identify it with human personality. In this Mrs. Eddy was following the example of Christ Jesus. The Master's provocative response when a man called him "good"—as well as his absolute reliance on the Father who did the works See Matt. 19:16, 17 and John 5:30; 14:10 . —points to the wisdom of turning attention away from human personality to divine Truth. The endurance of Jesus' teachings through the centuries confirms the rightness of this radical stand. 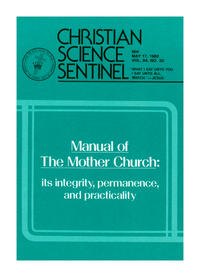