Mr. Wilson, the principal of Carol's small community high school, had the reputation among students of being a terrible driver. Some said he drove down the middle of the road so that if a tire blew out he'd have space on either side to maneuver the car to a stop.

Carol had laughed, too, but it became no laughing matter when she and several others were assigned to ride home in his car after a school debate.

Send a comment to the editors
NEXT IN THIS ISSUE
Testimony of Healing
I was in the medical profession for many years—... 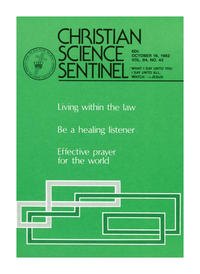