Our two daughters were enrolled in the Christian Science Sunday School...

One child had been troubled with an infected ear almost since birth. But she hadn't been to doctors since the age of three—when we were told that none of them could help her. She had been attending the Christian Science Sunday School a few weeks when her ear again became painful. I didn't know anything about Christian Science treatment, but I did have a copy of Science and Health by Mrs. Eddy that my sister had given me. I opened to page 97 and read: "The broadest facts array the most falsities against themselves, for they bring error from under cover. It requires courage to utter truth; for the higher Truth lifts her voice, the louder will error scream, until its inarticulate sound is forever silenced in oblivion." 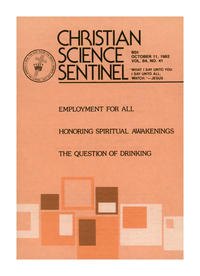