Having completed jungle-warfare training in central India before entering the Burma Campaign during World War II, my unit broke camp, but I was told to stay behind to dismantle and dispose of surplus Army stores and equipment. I posted guards around the camp and then retired. Next morning I was told that a man had been apprehended during the night while trying to steal an item of equipment and was being held in the public jail. I asked to see the prisoner. A youth was brought from the cells in handcuffs. He seemed petrified with fear and could not speak because of his serious situation. The jailers were likewise apprehensive and afraid. Because of what appeared to be unique circumstances, I was led to order the man's release.

Later on I was tempted to doubt my decision. But the Master's words "Blessed are the merciful: for they shall obtain mercy" Matt. 5:7. expunged all lingering doubts. I knew that in this particular case I had taken the right action. 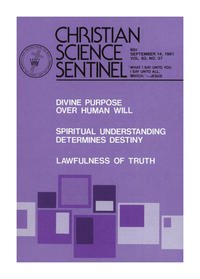