Perspective on the News

It is not enough to be appalled by, afraid of, or resigned to the crime and violence so prevalent. The problem is by no means confined to any one country, but recent outcroppings in the United States have included a 13 percent overall increase in violent crime during 1980, as recorded in the annual FBI report; a wave of child killings in Atlanta; a succession of rapes in Boston; widespread reports of arson; and the assassination attempt on President Reagan. People naturally ask why; they want to know what can be done.

Such atrocities reflect something more than individual criminality; they are encouraged by the mental climate of society. This fact by no means excuses them. But it indicates the nature and dimensions of the problem—and the fact that all of us, individually and collectively, can contribute to a solution.

Send a comment to the editors
NEXT IN THIS ISSUE
Editorial
Heredity: God's law versus human theory 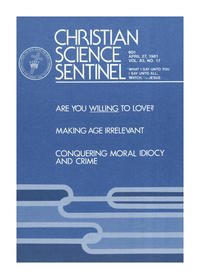