Thoughts from a reader in Shanghai, China

What does you good?

Although I had been a student of Christian Science for many years, I had been cut off from our periodicals for more than twenty years. When they started coming in regularly again not long ago, I was like a hungry man, reading them appreciatively and pondering over articles in The Christian Science Journal and the Christian Science Sentinel. There are three things that struck me. First of all, many articles and testimonies stressed the necessity for nothing less than total perseverance in the recognition of Truth. 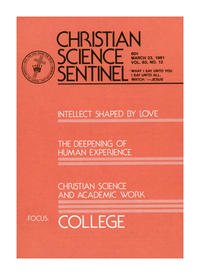