After graduation from Tulane University, New Orleans, where he majored in English, Mr. Moody spent a few years in the real estate business. He is a practitioner listed in The Christian Science Journal and a teacher of Christian Science. In 1974 he was appointed Committee on Publication for the State of Louisiana. Before moving to Boston, Mr. Moody was a member of Second Church of Christ, Scientist, New Orleans, and has served in a wide variety of activities, including Sunday School teacher and First Reader. 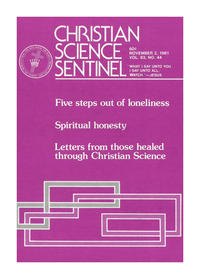