A few years ago, a small lump appeared in my groin

A few years ago, a small lump appeared in my groin. I wasn't too concerned about it until it began to steadily enlarge. Soon I had difficulty in sitting comfortably for any length of time. Finally, I decided to arm myself with potent spiritual truths and assert my innate perfection as God's child. I insisted that there could be nothing to harm man, since God, good, creates His ideas in His likeness.

Shortly after I began this reasoning, the lump became inflamed and quite painful. I was tempted to believe my prayer wasn't sufficient to bring healing, and I grew fearful. I then called a Christian Science practitioner for help on three consecutive days. When troubled by a problem, I often remember this statement quoted by Mrs. Eddy in Science and Health (p. 266): "Man's extremity is God's opportunity." This enables me to appreciate the many blessings I have to be thankful for and to realize that gratitude to God for all things is an important element of healing.

Send a comment to the editors
NEXT IN THIS ISSUE
Testimony of Healing
As a newcomer I enjoyed attending Sunday services and... 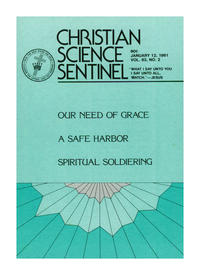