How I came into Christian Science

As a child, I attended Sunday School at a Christian church and listened eagerly to Bible stories filled with hope, inspiration, and the comforting assurance of God's salvation through His Son. This vision of divine help in human affairs faded when as an eleven year old I began to attend the adult services. Sermons containing personal opinions about God seemed to take the place of scriptural truths. I was beginning to wonder if God was a concept dreamed up by a small group of men to further their own ends.

A year later I began attending a prep school of some academic renown. The "scientific" way of thought—analytical, logical, relentlessly cutting through opinion and dogma to get at conclusive concrete proof—was drilled into me. By my second year I was an honors student—and an atheist. 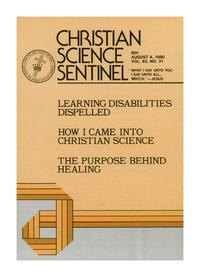